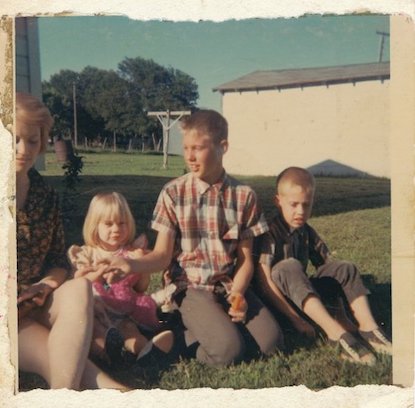 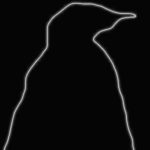 This photo was taken April 14th, 1968.  My family lived in Tolar, Texas while Dad was keeping us safe from the Communists in Vietnam.  It was a beautiful Easter Sunday and we had big plans that day.  However, the story actually begins in 1962 when I was in the first grade in San Antonio.

One day when I was walking home from school a brown dachshund followed me.  The backyard of our house, protected by a small picket fence, opened into an alley where the garage was.  I would walk through the alley to get home and that’s where the dog found me.  She was obviously hungry.  So I coaxed her into the backyard and went into the house to get her something to eat.  I found some bologna in the fridge and took it out to her and she quickly gobbled it up.  I told my mother, who was taking care of my younger brother, Mardy, that a dog had followed me home and she went to look at the forlorn weenie, who had thrown-up the bologna.  My mother said she looked sad like Greta Garbo.  I asked her if we could keep the dog since she obviously didn’t have an owner because she was starved and she followed me home and my mother, resisting at first, said, if she was still there the next morning we could keep her.  So I promptly walked to the back gate and locked it.  We (Mom) named the dog Greta.

So on Easter Sunday in 1968, Mom, my brother, Mardy, my sister, Sarah, and I were sitting under the big pecan tree in our front yard.  Later that year at Christmas we would pick up the pecans and sell them at a local store for Christmas present money.  Money was very tight because back then there wasn’t online banking so Dad literally sent us money from Vietnam, which wasn’t at all timely or necessarily sufficient, so that pecan tree was a gift from God.  A little more than a week before Easter Martin Luther King had been murdered.  The Memorial was to be held that day and I remember hearing about it on tv.  In fact, I was watching tv during the Tet Offensive a couple months before and remember seeing terrifying images of dead and wounded soldiers in Vietnam, even images where Dad was stationed at Da Nang.   But on that beautiful Sunday we weren’t watching tv.  We were waiting for special visitors to arrive.  However, this part of the story actually continues in 1962.

We had neighbors in that area of San Antonio who were friends of my parents.  I don’t remember all their names but I do remember a few, “Tito,” “Peewee,” “Mouse,” and “Shotgun.”  I remember being in their backyard one time for a picnic and they had a deer carcass hanging from a clothesline pole.  This was happening around the time of the Cuban Missile Crisis.  Dad worked for the National Security Agency and didn’t tell Mom San Antonio was considered a dangerous place because of Russian missiles that were apparently pointed at all the military installations there.  As the family story goes, one of the guys who worked with Dad told his wife to get out of San Antonio with the kids because it was too dangerous.  Dad never told Mom to do that because, duh, he worked for the NSA.  She held that against him for a long time.  Anyway, the extended family of these folks in whose backyard we were playing, became longtime family friends.  They lived out in the country near Seguin.  The kids I played with were named Trinka and Cody.  Their mom’s name was Katherine.  I’d been born in San Antonio, but we’d moved, and my younger brother, Mardy, had been born in Germany only about a year before.  That’s where Dad had been stationed as the Berlin Wall was being built.  NSA, you know.  So Dad quickly got orders yet again to return to Germany to listen to what the Soviets, “Ivan Ivanovich,” as he referred to them, were up to. Unfortunately, we couldn’t take Greta with us, so we gave her to Katherine, Trinka and Cody.

On Easter, 1968, we were waiting for Katherine, Trinka and Cody to visit us from Seguin.  They were bringing Greta with them and a litter of her pups.  They were going to give us one of the pups so were were very excited about seeing Greta after all those years and getting a new weenie dog!  However, there was another special guest coming, but that story continues as we returned to Germany.

I was in the second grade in Zweibrucken, Germany at the school on the post.  We lived in town, though, on Beethoven Strasse.  There were bullet holes in the stone exterior of our apartment from World War Two.  They also dug up an unexploded bomb from our backyard and had to evacuate the neighborhood when they did it.  We were there when John F. Kennedy was assassinated.  I remember that day because Mom didn’t get out of bed.  By the time I was in the fourth grade we’d moved to Darmstadt and by then some of our friends from San Antonio, Dean and Gail and their daughter Laurie were also there.  Dean worked with Dad.  Laurie was about my age so we were great friends.  Larry and Laurie.  We had a thick forest behind our apartment so all of us kids loved to play back there.  My sister was born at this time and my brother and I played Army with big plastic guns and baseball and climbed trees and threw super balls out of windows into traffic, and anything else kids got up to, and it was a lot.  You see, we didn’t have video games back then.  We were deprived.

By Easter,1968, Dad and Dean were in Vietnam.  So Gail and Laurie would also be joining us in Tolar, from San Antonio!  Tolar is where my grandmother lived before she passed away.  Dad’s ancestors founded the Church of Christ there.  We were in her house.  Mom would sometimes take us to the Baptist Church and everyone was shocked to see the Lemmons there.  We didn’t go to church that Easter.  We were waiting for two families and weenie dogs to arrive!

One interesting fact about later in the year, Mom on a whim, decided late one evening to drive to Seguin and visit Katherine June 5th.  The reason I remember the date is because we were on the road that night listening to the radio when we heard Robert Kennedy had been shot after he’d won the California Primary.  He probably would have been President, but he was cut down, just like his brother.  Everybody was really depressed.  It was very early in the morning, June 6th, we met Katherine at a beer joint so we could follow her to her house way out in the country.  They said Kennedy had died.  And, of course, the riots later in Chicago during the Democratic Convention set everybody on edge.  That was a tough year all round, worrying about Dad, worrying about the country, thinking the world had turned upside down.  That song by Dion, “Abraham, Martin and John” would come out later in the year.  But a lot of that hadn’t happened yet.  The number one song on Billboard on Easter was Bobby Goldsboro’s “Honey.”  Wikipedia says, “the Hot 100 top 10 run of "Honey" began the week of the King assassination and ended the week of the assassination of Robert Kennedy, and no other Hot 100 entry had a top 10 run that spanned that same time interval.”  It was a song about a guy whose wife died.

Anyway, it was Easter we were ready to have a great day!

Katherine, Trinka and Cody arrived with Greta and the pups.  What a great reunion!  I saw that hungry stray dog’s face in the much older, gray face.  I wondered if she remembered the little kid she followed who gave her bologna that made her sick.  Of course she did!  Dogs remember everything, right?  It was clear the dogs were just happy to be out of the car.  There were four pups, little weenies wagging their tales, panting, sniffing the grass.  Trinka was about my age and Cody was about my brother’s age.  Now, I should probably tell you something about Cody.  He was a little wild.  He was a country kid, as young as he was, accustomed to hunting, swimming with water moccasins in the cattle tank, and eating raw grasshoppers.  He’d just pick them up off the ground, pop them into his mouth and crunch them up.  We were getting hungry by this time but didn’t want to get into the great holiday spread Mom had prepared until Gail and Laurie arrived; ham and deviled eggs, you know, after Sarah’s and Mardy’s Easter Egg hunt that morning.  But soon they did arrive and what a surprise!

They’d brought bunnies with them!  Cute little white baby Easter bunnies, about five of them in a cage.  Well, obviously we had a fun day, playing games, eating, hanging out with the animals, but all of us missing our fathers.  Mom decided we should go to Granbury and get some ice cream.  We put the dogs in the garage and put the rabbits back in the cage and placed it on a table in the garage and then piled into one of the cars and drove the nine miles to and back from Granbury with ice cream cones, trying to eat it all before it melted onto our hands.  The little kids were unsuccessful.  The pristine cones at the DQ became messy blobs in the car.

When we opened the garage door, eager to play with the pups and bunnies we were met with carnage.  Somehow the cute white bunnies had gotten out of the cage and onto the floor where they’d all been slaughtered by the dogs.  There was blood splattered on the floor and on the bunnies, who were lifeless, their teeth bared, obviously terrified before they met death in the form of the happiest little puppy dogs with red-stained teeth, wagging their tales, so happy to see us and to show us what they’d done.  What good little predators!   My brother, Mardy, was traumatized. We never knew exactly what had happened, but we suspected Cody had taken the rabbits out of the cage and put them on the floor before joining us in the car.  We couldn’t think of anyone else who would do such a thing.  He did eat grasshoppers, after all. He denied it, but he didn’t seem at all moved by the incident.  We took the bunnies to the landfill and buried them, offering our respects to the spirit of the Easter Bunny. The next day everyone went home and we kept one of the pups. We (Mom) named him Max, short for Maximilian Puddles, because he left so many of them.  Years later Mardy would always tear up, and we’d giggle, when our families reunited and we retold the inspirational traditional holiday story of… The Easter Gift.